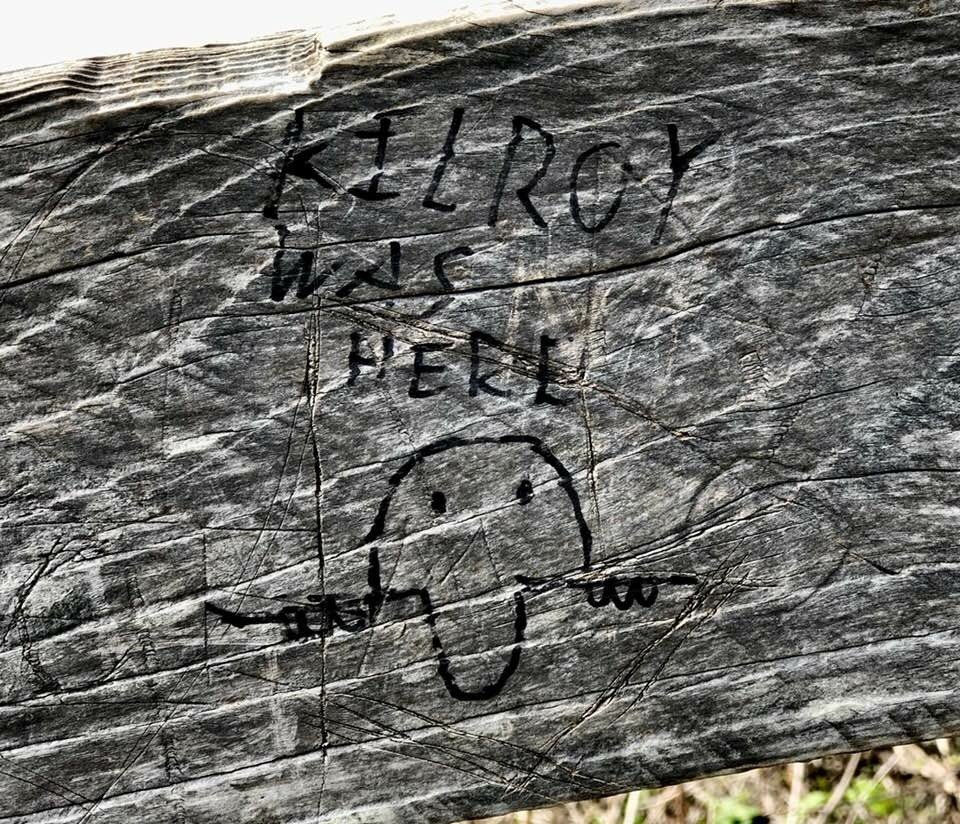 I am at a crossroads on this human penchant to leave a mark on almost anything. We paint, carve, notch, scratch, and write on mother nature, walls, and just about anything. Kilroy was here.
It gets sicky from here. If it’s old and, in a sense, historical, we revere it. A record from the past. Petroglyphs, pictographs, and anything that left a trace of our ancestors. Today, with the population growing and more and more access to our natural wonders, leaving a “historical” trail is an eyesore and, in some cases, permanent destruction or defacing of our land and sites. They spray paint without thought or care for the next person who will visit.

I travel a lot into our National Parks, remote backcountry, and Monuments. As a photographer, I am looking to experience and share the beauty of our world. At times it is simply awe-inspiring and humbling to be there. Suddenly, I am reminded of the world in which we live; those with no clue what they are doing and their lack of caring or even understanding what they have done.
A few weeks ago, I was on a photography trip to northern California and the southern Oregon coast. The redwoods, the sea, and the rivers all in my mind to find interesting and beautiful shots. My campsite at Jedidiah Smith Redwoods State Park was clean, cared for, and excellent.
Then I visited Stout Grove on the other side of the Smith River from my campsite.

The easy access to all is evident in the following images. I will let the images speak for themselves:

Hiking out to an overlook at the Klamath River’s mouth, the fence was even carved up. Driving up backroads, some folks took the liberty of dumping their truckload of trash in a turnout or over the side of the hill. While driving home back up the Smith River, I often stopped looking for interesting photos. Hiking down steep trails on the river bank at turnouts and stopping points, I was appalled at the massive amount of toilet paper sitting on the surface, not buried. I had to leave, got back to my car, and drove away. All that runoff is going into the river! How about a swim? NOT! It was everywhere.

Arriving in Cave Creek, I decided to visit the Oregon Caves. On tour, we stopped to look at a wall near the alternate entrance. The main entrance was closed to no disturb the hibernating bats. The wall of the cave was covered in signatures of the visitors. Minerals had long since formed a coating over them and made it impossible to remove. They are now a historical record book of visitors written there before it became a National Monument. Some of the signatures are even of the first caretakers after the Monument was formed.

There seems to be a noticeable uptick in stupidity over the last few years. Boy Scout leaders were tipping over a balanced rock, driving a truck out onto The Racetrack in Death Valley National Park, using charcoal from an ancient fire pit to write on a wall of petroglyphs in Mesa Verde National Park. The list goes on. (unfortunately). Did they not know they were in a National Park? Did they not pay attention to the signs or materials provided? Stupid questions! Of course, they didn’t.

Back to my crossroads.

I enjoy taking photos of the graffiti on the walls of downtown Phoenix. They have been defaced with urban art. We somehow have gotten over it and accept that as part of the human expression in these environments. But it does not translate well to nature, to our Parks and wildlands. It destroys things that can’t be replaced or fixed. Mother nature will, over a long amount of time, take care of them. The tagger’s name will fade into the forgotten places of man. But for now, myself and all who travel to enjoy our natural world have to look upon the stupidity of a few. I have Photoshop to thank for removing some.

Unfortunately, the very folks I wish would read this will not. I preach to the choir.
You may not believe in Global Warming. But we do have a profound effect on the Biosphere in which we live. Some are visual, like painting over or scratching your name into a petroglyph wall. Others are environmental. Shitting in the woods and not burying it or, better yet, carrying it out as required by the signs and information you were given when you entered the area—leaving your trash for others to clean up.

I don’t have answers or solutions. I hope that the penchant for documenting their actions and posting to social media will get them caught and shamed. Others will see it and think twice about doing similar actions.

But I’m not hopeful. Those that eat Tide Pods or snort condoms up their nose confound me. So-called “adults” who take groups of our young men and women out to camp in the parks and then act like self-centered 17-year-olds is confusing.

Humanity is still trying to grow up and doing a lousy job of it. Earth will survive us. Nature will clean up and recycle all we build and leave as waste in our short wake in time.
The real question is the length of our tenure here.

Being Published in National Geographic Traveler – A Milestone