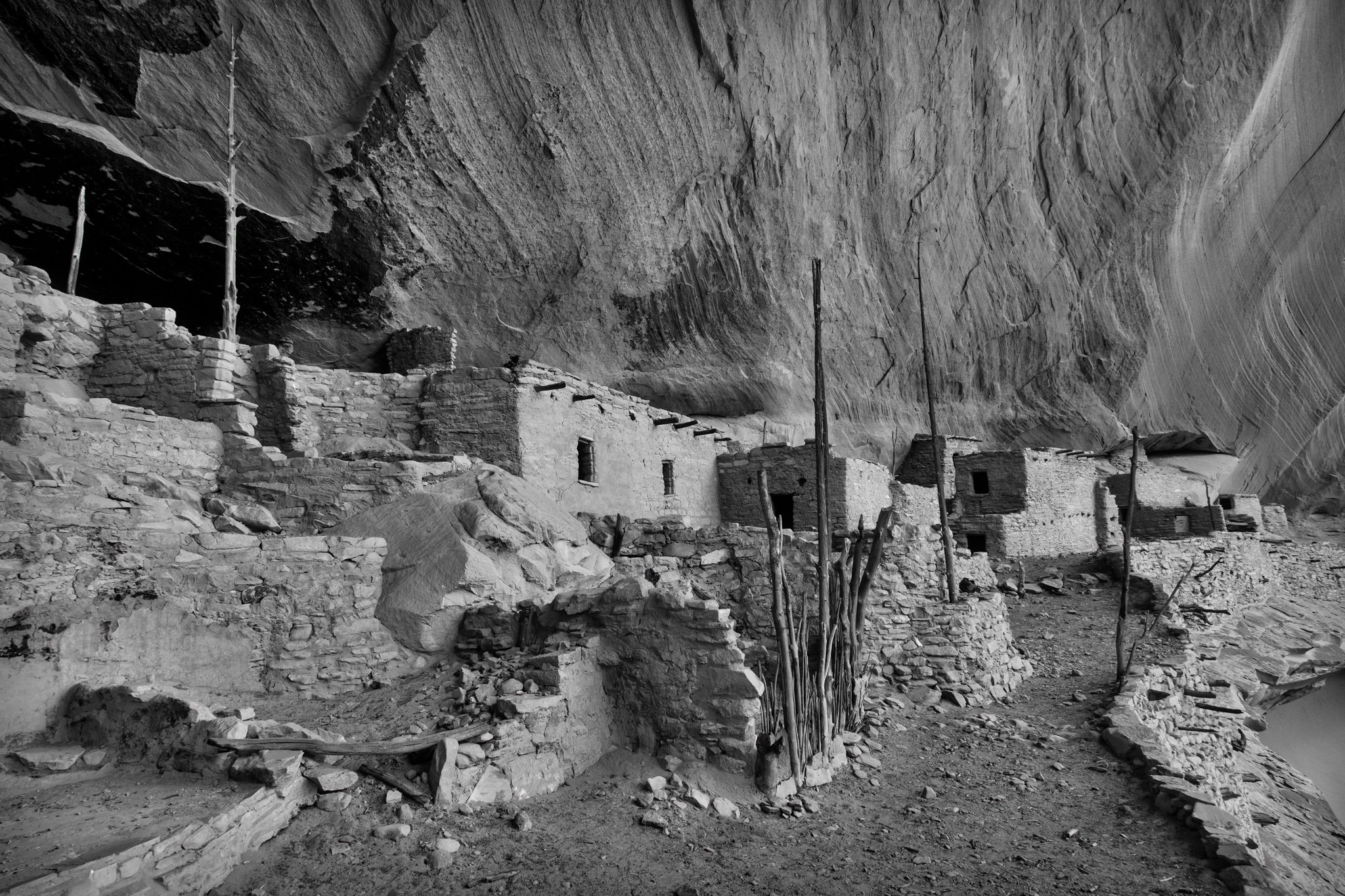 Every journey begins with that first step. In this case, it’s the beginning of a climb down from the Shonto Plateau into the Tsegi Canyon system. Located in the Navajo National Monument, it is surrounded by the Navajo Nation. Just west of Kayenta, Arizona, these canyons contain many dwellings. The largest are Keet Seel (Kitsʼiil) or Broken Pottery, Betatakin  (Bitátʼahkin) or Ledge House, and Inscription House (Tsʼah Biiʼ Kin). Betatakin is viewable by taking a short hike on a paved trail from the Visitor Center. Inscription House is currently closed to visitors.

To visit and tour the Keet Seel ruins, you need a permit.  It is a 17-mile round trip that drops into the canyon.  Part of which is a 1000 foot descent down stone, wood retained stairs, and sand. This steepest portion is  0.8 of a mile. At 2.5 miles in, you arrive at the bottom and begin to follow the white marker poles and cross the stream many times. The exact track is perpetually changing due to the flash floods each monsoon season.  Your hike can be canceled due to the large thunderheads building to the north of the canyons.

With our packs heavy with water and camera gear, we set out at dawn—three guys filled with anticipation of climbing up and being in ruins. Few go there due to the remote location and difficulty in hiking. This is especially true if you plan to camp overnight at Keet Seel as we did.  It wasn’t long into the hike when we began wondering if we had bit off more than we had planned on. Other than the first 2.5 miles down, it is a hike up the canyon and a rise of only 300 feet in 6 miles and walking in soft sand, quicksand during creek crossings, slipping on algae-covered stream beds, and dealing with the sun and heat. Water becomes more valuable than gold. As advised, we stashed water on the way in, which lightened the packs considerably as we ventured further into the canyon. Day hikers brave the round trip with lighter packs but still drop off water along the way.

We left before 8 am as required but did not arrive at the campground until after 3 pm. Hurriedly we dashed over to the ranger station to check-in before the deadline of 4 pm. Sore, exhausted and wanting to sleep, our guide took us on a short hike up to the ledge, where up to 150 people lived from approximately 1272 A.D. to 1306 A.D. Suddenly abandoned, no one is quite sure why they left. A draught? A spiritual quest? Corn cobs still litter the site, as do pottery shards. Food was stored in sealed-up rooms as if they intended to return. They never did. But nature astonishingly preserved this place.

The only way in is a set of ladders strung together to climb up to the ledge. Those that lived there used only hand, and footholds cut into the sandstone. You can see some of these as you climb. Willing my legs to keep working, I arrived at our destination. Finally, here, exhausted and wondering how I would find the strength to hike out in the morning, I sat down on a rock and gazed at the site. All three of us were pushing our limits of endurance. The heat and the terrain had taken their toll. But wonder still set in as we took out our cameras to record our brief time at this amazing place. Tripods are not allowed in the ruins area. I moved my ISO up to 400 to help the shutter speed while shooting handheld.

Our young guide told us the Keet Seel story, making it real as we were inches from walls built by hand with sticks, rock, and mud. There had been an attempt to rebuild some of the sites where walls had come down. This work was shoddy compared to the original builders. There was care taken and even a pride built into the structures. Wooden roofs could catch fire, and the home would be lost. The family had to move out of the village most of the time if this happened. A motivation to keep that from happening! In this arid land and compact housing, I imagine rules like this helped prevent a disaster from befalling.

Ceremonial Kivas, food storage rooms, family dwellings, all as small as an average bathroom in a modern home, make up the site. Ceiling heights are only five feet on average except for the Kiva. Black marks the walls where fires burned to keep them warm in winter or for cooking.

The corn they grew is small and only slightly larger than a finger’s size on a large hand. The small cobs are still lying around the site after 700 years! They also grew beans and cucurbits (gourds). They also hunted. Many lived up and down these canyon walls. Smaller structures are hidden away from us, and only the Navajo visit them.  People still live in Tsegi Canyon. Cattle and horses run loose everywhere. Gates keep the areas that are part of the National Monument protected from them. But most of the land that you hike through belongs to the Navajo Nation. Your job is to transit the distance each way between 8 am and 4 pm. The rules are simple: leave things alone, respect the land and the people, and take out yourself, your trash, and your gear.

Looking into every place we could while taking images to last a lifetime, it was finally time to climb back down the ladders and head to camp. The time was too short. We said goodbye and shook hands with our guide. He only lives down there for 5 days at a time as the guides rotate in. He hikes in and out like the rest of us do. But his legs are sprier than mine. At 63, a fifty + pound pack is no easy thing anymore, especially in these conditions.

Camp never looked so good. Resting and eating until dark, we pulled out our camera gear again and shot the dark skies. The Milky Way is so brilliant there. There are no light domes from cities in our shots. Truly dark skies. Our wonder keeping us awake, and being the only ones in the camp, we had a full run of the place until the wee hours.

Soon it was morning. I awoke at 3:30 am. Cold and needing to eat, I started my day. Brian was up next at 4 am, followed by Patrick at 5:30. Packs full and water shoes on, we looked at each other with that “you know we have to do this” look and began the trek out at 7 am. This allowed us to hike in the shade and cool temperatures for many hours. We struck up a pace and hardly stopped for four miles. We tried not to waste steps, cutting as straight a line as possible down the canyon. Follow the cattle and horses, they said. They know where to go and not get in the quicksand. Before 11 am we arrived at the base of the climb out. The place where water had been stashed. After some food and energy drinks, we dug in for the climb, full sun on our backs, and a sandy trail to start with. Partway up, we gathered the other water that was stashed. A breeze came up, allowing us to air cool from the sweat. As we crested the top and made our way to the car, we put our hands in the air as good as a Rocky Balboa stance and started to chant the song.

Sore, once again tired and weak, we had made it. Checking in with the Visitor Center, so they knew we were back and safe, we smiled and shook hands with the Navajo gentleman at the desk. He smiled back in a knowing look. This is his land.

As a nation, we have taken on the role of preserving so many sites and places for posterity. Some of which are contained in the vast Navajo Nation. I travel and visit many of them with my fellow photography buddies. We not only experience them, but we also document them for others. Many will never make this trip nor have the ability to do so. But through our eyes and images, we can share them, bring to light their important place in history and for the future nation, we call the United States of America. We must protect them from harm, from dissolution. What is lost is lost forever.

The dust is now washed off, the gear put back in its place. The memory of the pain and exhaustion will fade, and we will talk about the adventure we had. I asked our guide how many folks ever visit this remote place. He said maybe up to 3000 people per year. That is what makes this so special. For those that can, they should. My only hope is that you can see the beauty and history through my lens and words written here for those who can’t. There will come a time when I can no longer visit these remote places. I will have the memories and the photos to turn to and the stories to tell to those who will listen.

Larry Pollock is a professional product photographer with a passion for black and white American Southwest images.