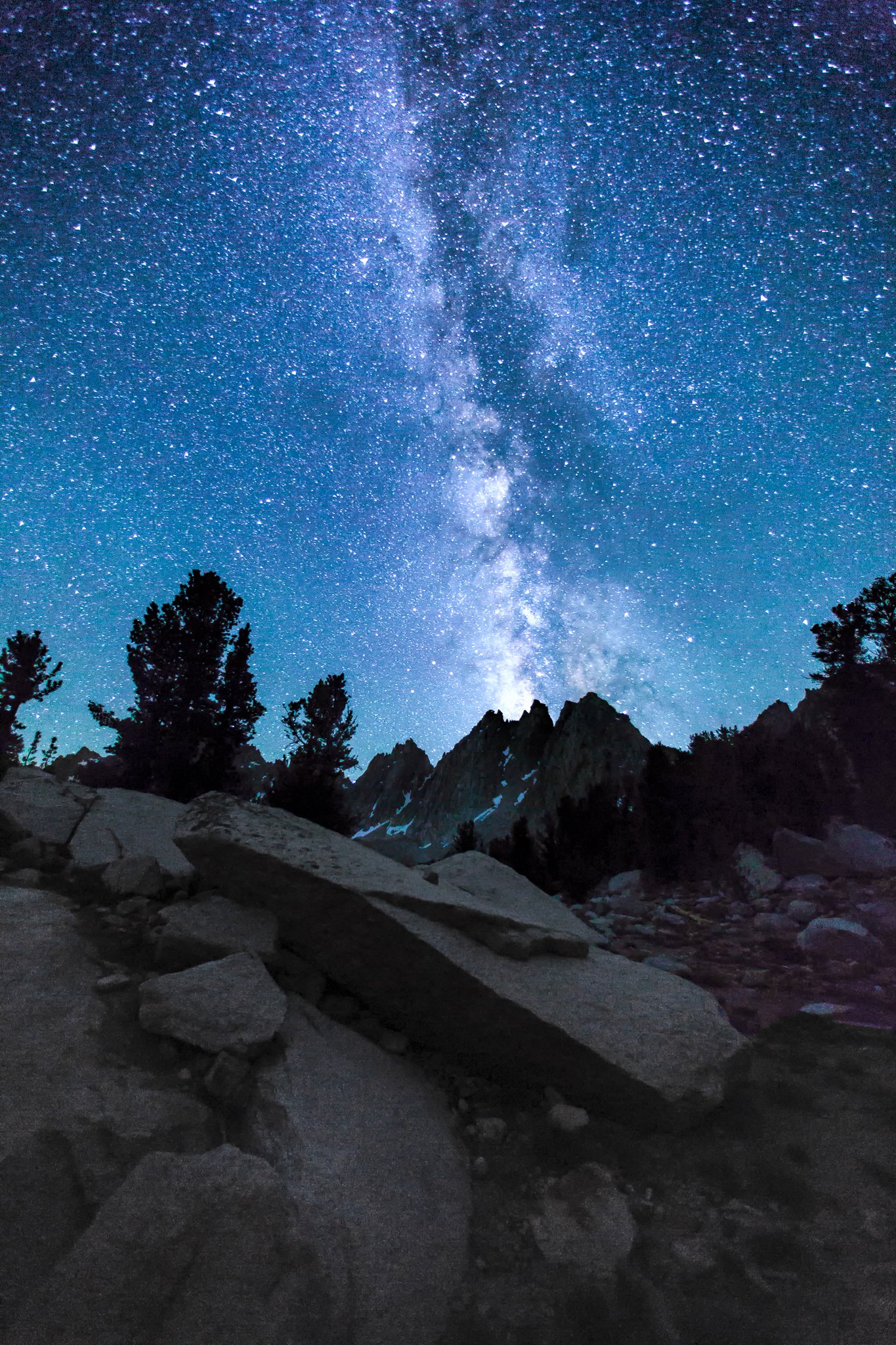 Life has a way of humbling you when you least expect it. After 60 years on the planet, with so many experiences, you would think that I would know better. I had hiked the Sierra Nevada Mountains and took others on adventures there 42 years ago. I wasn’t feeling cocky or over-confident going into my trip to the Rae Lakes area of Kings Canyon National Park last week. I knew full well the challenges ahead and with 42 years under my belt since the last trip I made sure to be in good shape physically.

Alex McClure, Olympus Trailblazer, asked me if I would like to go on this photography adventure. But this time instead of hiking in from the west side we would climb up the steep eastern slope of the mountains from the Onion Valley parking lot, a 3200 foot climb to Kearsarge Pass in just under 4.5 miles. Enthusiastic to return to this magical place, I said yes.

Along for the adventure where: Tom Corey, John Morey, Nicholas Pappagallo, Alex and my long time friend Teri Hildenbrand. Teri and I had visited this area on my last trip 42 years earlier. It was on her Bucket List to return as well. Being photographers (except Teri) we had extra gear to carry. Not only that, but things had changed since my early 70s trip(s). You now needed a water filter and a bear vault to protect your food in. This also added additional weight we did not have back in “the day”.

Nearing the pass at 11,760′ I was looking forward to sitting down to eat a good bit of food to fill the “gas tank” again. I didn’t get that chance. About 400′ below the saddle my head spun around and my legs said “sit!”. I quickly found a rock to sit on and broke out some snacks. I checked my water supply in my 100ml Camelback. Getting low… For 45 minutes I sat, eat, drank water and wondered if my legs would come back and allow me to make it to the top? A passing hiker had extra water and quickly doubled my water supply. I am forever grateful, whoever you are! Finally I was able to get up and climb up a bit further. John Morey met me on a switch back and took some of the weight off my pack. I trudged on…

Just a 100 feet of trail left to the top, Tom Corey and John Morey grabbed my pack off my back and I was able to summit the pass with just my hiking poles. To rest again and eat some more….

The group started down and across the high country to Charlotte Lake. My good friend Teri and I both had over weight packs. I don’t know how she did it but she dug deep and made it to Charlotte Lake. In fact, she made the whole trip with more weight that anyone could or should have asked of her. My pack was no cake walk either. An older pack, one my folks had used back 25 years ago, it would not take and hold the weight on the hips. I had it all on my shoulders making it hard to breath well and it was painful! Charlotte Lake was my resting camp for the next 30 hours or so. I had a bad bout with Altitude Sickness for about 12 hours and was weak from the climb on the day before. But the second night I could breath and had legs again. Tom and John had headed out for Rae Lakes. Nicholas, Teri, Alex and I headed out for sunset photos and later some star photos along with the Milky Way near camp.

I was still wondering about my ability to get myself out of this side of the pass. The night before and even in the morning I had asked Alex to look into pack horses/mules or even a helicopter. I was sick. I was getting scared and all I wanted was to be home. But no Ranger was at the camp as we were expecting. With much patience and allowing time to pass, Alex helped me to recover enough to get some photos and to agree to hike to Kearsarge Lakes to spend the next few days waiting for John and Tom to return.

Hiking over to Kearsarge Lakes was no easy walk. Little did we know but Alex was coming down with a respiratory infection. He quickly fell into the last position in the hiking chain. I was next with Teri and Nik way out ahead. I was soon alone and hiking in heat, managing my water supply and snacking often. It was here, seemingly alone, pack not fitting right and over weight, still not fully recovered and with Kearsarge Pass still facing me to get home that I had a cathartic moment. Friends of mine use to run Vision Quests in the desert. What you carried with you on your back was representative of the burdens you carry in life. Things you need to look at and best set down and leave behind. Move on… With all my wisdom and years I had allowed myself to get into a situation I had helped a number of folks avoid. I was usually the one helping others out of a jam or preventing it in the first place. But here I was, humbled before the immensity of nature and my own folly, bad decision-making and nowhere to run or hide. All fingers pointed back to me. Not an easy thing to say. It would take many days after returning from this trip to understand the lessons and come to grips with my own mortality and limitations. But I found great strength and calmness in the process. The gift(s) in the middle of the pain. And maybe that is as it was meant to be. To be reminded of the vastness and also the beauty of it all. To remember who we are. We are immensely powerful yet extremely small in the universe. We are not separate from it but rather integrated perfectly within it…

Standing at night under the stars and a vibrate Milky Way, like many have never seen, become a world of wonder for me. I was there, alive and calm. I had my pro camera gear. The pass could wait. I had images to capture. To somehow convey to the viewer the grandeur we live in. If only for a moment.

The trip was perfect. Camping at Kearsarge Lakes is amazing. Tom and John caught up with us. They bumped into Teri who had been out hiking for the day and she helped lead them to our camp. The whole crew was out taking sunset images that evening. Nicholas and I went back down to the lake after the others and gone to bed to do Milky Way Panorama images. A great way to end the last night.

Between 7am and 8am everyone headed out for the pass. In less than 1.5 hours we were on the top. Except for Alex, who was now the one struggling due to the infection. Tom headed back down the trail and took Alex’s pack and brought it up to the top. While waiting for Alex, John took many things out of Alex’s pack to lighten the load. We all made it out. The parking lot never looked so good! Cold beer was hidden in an ice chest in the truck. We celebrated on the spot!

Driving down to Independence, we found an appropriately named cafe called The Still Life. With food and more beer we said our goodbyes to Teri who was driving north and we, south. Turns out her headlights stopped working and she was forced to spend the night in Bridgeport, just north of Mono Lake. Another part of perfect.

Will I return to the high peaks? Only time will tell. If I could change the trip, would I? It would not be the trip with the agony and ecstasy it was. We can’t go back except in our minds and yes, via the images we captured. Enjoy them as much as I do.